The weather gods shone down on a beautiful sunny day’s play with the perfect number of eight competing for the iris from the Stow plant stall in the eponymous trophy. Colin Spencer put his name on the pot for the first time with four clear wins.

Bryan enjoyed himself in the national finals at Nottingham,

ending up in sixth place with four wins.

Quite a contrast with the previous entry, a fortnight earlier. Nine of us enjoyed an enjoyable day’s play in the warm sunshine. Shirt sleeve – as opposed to woolly fleece – weather. After a competitive session, Bryan Saddington was victorious with 5 wins out of 6 and will go through to the national Oneball finals at Nottingham in May. We raised £70 in the process for this year’s charity, MIND.

An interesting start to the year’s play with hail, sleet and finally sunshine heralding the new season.

After an enjoyable season’s play, the list of club tournament winners:

A very enjoyable gathering of eighteen members for lunch

in the Coach House at the Hare Arms. A good time for a chat.

Don, David and Jonathan had a very enjoyable match on a warm September day with Don the winner after victories over his fellow competitors.

Bryan, David and Jonathan had a fine battle with the visitors from Gt Dunham. Bryan won his singles match before lunch but Dunham prevailed in the remaining games with the final score 1-3.

The postponed Golf Doubles tournament finally took place – and we managed to dodge the rain, finishing just as it began descending in slightly larger doses. There were ten participants with the new pairing of Colin Spencer and Gill Dobson winning three out of four and thus taking the eponymous pot.

For our final match in the Golf league, Cliff Clifford, Gill Dobson and Don Morris had a good battle with the visitors from Essex (who arrived early and helped put up the new gazebo for the first time). After an enjoyable day’s play, honours were even with a 5-5 draw. All topped off with a tasty Stow tea.

The quartet of Colin, Lucy, Don and Celia spent an enjoyable afternoon playing a Golf friendly, kindly hosted by Duncan Hector. There were reports of a good lawn and excellent cake.

Jonathan, Ian and Colin played well in this match against some very skilled opponents in Adrian Kirby (-1/2), Debbie Lines (-1) and Stephen Cornelius (11). After the morning’s play of a doubles and singles we were level. In the afternoon, Ian beat Debbie and Jonathan beat Adrian, with a final result of 3-2. Our first win in the leagues!

Derek, Ruth and Colin battled through increasingly soggy conditions and achieved a creditable 5-5 draw. A good performance from Colin, winning all his games in his first Golf league match.

Bryan and Jonathan fought an interesting battle with Bryan looking destined to win by a large margin for most of the morning until Jonathan finally got his act together in the final twenty minutes and scraped through by two points.

Jonathan, David and Bryan travelled to Eaton Park for the away fixture v Norwich. The hosts had two minus players in Nick Harris (-1) and Sam Murray (-2) so unsurprisingly we did not fare very well. The final result was 4-0 to Norwich.

The team of David, Jonathan, Ian Thompson and Jonathan Jackson battled away against a good Norwich team of Sarah Barley, Jonathan Sisson and Robin Farman. Both of the morning’s games of singles and doubles were resounding victories for the visitors but after lunch things were a bit closer with Ian winning his game by 4 and the two Jonathans losing by the same margin – not bad considering that it was J Jackson’s first match. All topped off with an enjoyable tea in the sunshine.

Derek, Ruth, David and Jonathan travelled to Newport on the Herts/Essex border for a very friendly battle with one of the Newport teams. They proved far more competent and won easily (16 – 2) but it was an enjoyable day on good lawns with only one brief interruption of a passing shower.

Six entrants playing in the sunshine…Colin, Jon, Vickie, Bryan, Jonathan and David. We had an enjoyable day’s play with Bryan, David and Jonathan all finishing with three wins. David had the highest points score and was awarded the trophy. 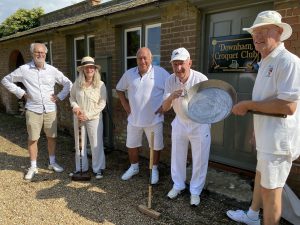 Zen and the art of mowing…

A very close contest which ended in an equitable draw, 5-5 after ten games. The weather was reasonable until lunchtime when there was a dash for cover but the sun came out after lunch and battle resumed. David and Ruth won the doubles and Cliff and Ruth each won two singles. The day topped off with an enjoyable tea and friendly chat.

Weds 12 May
Assn league match v Pinchbeck (away)
The intrepid Downham Allstars visited the lovely lawn and garden of Pinchbeck for a very close tussle.
Playing in his first match, Colin did well as a doubles partner to Jonathan and Bryan. We won the
morning’s two games but lost the afternoon’s. A 2-2 draw was a fair result.

Weds 5 May
Golf league match v Letchworth
The first of our league matches. A bit chilly at times but the rain held off. Letchworth were a good team, winning 9-1,
but Gill D, Nick and Ruth played well. Tea in the sunshine in front of the clubhouse. Lovely! (Below : the players…
Ruth, Stuart, Sheila, Gill, Nick and Sue).

Sat 17 April 2021
Kathleen Butters Trophy
Our opening event was this One Ball tournament, part of a national series raising funds this year for the British Heart Foundation.

Ten of us battling away for the Kathleen Butters Trophy in the warm sunshine at Stow. After six games there were two players with five wins, Don and Colin, neither of whom had played the other. The contest was resolved with a thrilling shootout for Hoop 1, clinched by Colin. He (much to his surprise), as well as taking home the lovely painting of the clubhouse, will be off to play in the national finals at Surbiton on 9 May.